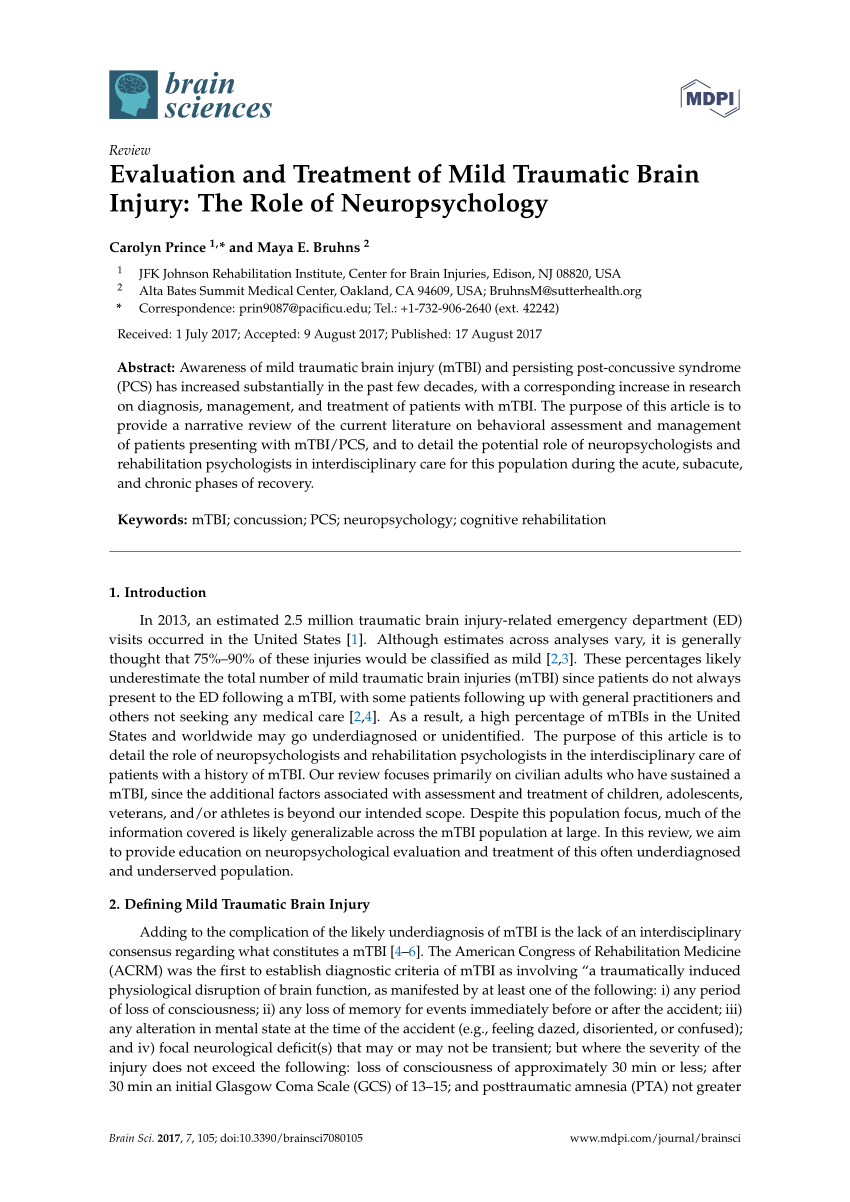 Estimates vary, but studies suggest that 8—20 percent of service members may have experienced a TBI Hoge, McGurk, et al. Many service members who have experienced a mild TBI mTBI , also known as a concussion, receive care through the Military Health System MHS , but the frequency and nature of their post-injury health care has not been described in a large cohort. The goal of this research is to provide timely information to DoD that can be used to help assess and improve care for service members with mTBI.

Mild cases of TBI can be challenging to identify and treat due to variations in symptom presentation and other factors. To deliver the most efficient and effective treatment for service members with mTBI, it is important to first understand how many and which service members receive an mTBI diagnosis, where they receive care, the types of treatment they receive, and the duration of their care. The ultimate goal of improving the care delivered to this population and subsequent clinical outcomes depends on a solid evidence base.

This study provides a first step in establishing that base by describing the service member population diagnosed with an mTBI, their clinical characteristics, and the care they receive. Because of the difficulty in accurately diagnosing mTBI and variability in screening procedures, there have been calls for clear and consistent definitions of study populations and standard guidelines for diagnosis see, e. The research community has also highlighted the need to account for conditions often present with mTBI, such as post-traumatic stress disorder PTSD and depression Carlson et al.

This study—the first comprehensive analysis of the types and patterns of care delivered by the MHS to service members following an mTBI diagnosis—aims to fill some of these gaps. The findings presented here lay the groundwork for future research to assess and improve the quality of care by characterizing the population of service members who have received care for mTBI through the MHS, as well as the care that they have received, using health care utilization data.

Then, we drew on individual health care utilization records to characterize service members who received a diagnosis of mTBI and assessed the care they received, including the types of care, the settings in which the care was provided, and the types of providers who delivered the care. Finally, we explored patterns of care, describing health care received up to six months after an mTBI diagnosis, including the duration and patterns of utilization.

The results of this study are intended to support the MHS in its effort to deliver care more effectively and efficiently to service members diagnosed with an mTBI. However, they should also prove valuable to other health systems and health care professionals and officials involved with treating or setting policies regarding the treatment of service members and civilians with mTBI. For patients with a moderate or severe TBI, long-term outcomes can vary from full recovery to complete dependence on care providers.

Department of Veterans Affairs [VA], However, for some people, symptoms and cognitive deficits can persist for years Ruff, To understand the care received by nondeployed active-duty service members after an mTBI diagnosis, we analyzed individual-level health care utilization data. These administrative data detail when a service member visits a health care provider; characteristics of those visits, such as the location of care and the provider who treated the service member; the diagnoses and procedures that are recorded during those visits; and prescriptions filled by the service member.

These data do not include clinical notes entered into the medical record by providers. Military health care utilization data are managed and maintained by the Defense Health Agency, and the files used in our analysis were extracted from the MHS Data Repository. The repository contains records on all health care encounters paid for by the MHS; our analysis focused on health care use among nondeployed active-duty service members who received an mTBI diagnosis in calendar year and only health care received in garrison. We were not able to observe health care received in theater. The files were linked by scrambled Social Security numbers, so we were able to follow individual service members over time.

To augment the health care utilization data, we used individual-level data from the Defense Manpower Data Center DMDC , which included the dates and locations of service members' deployments; service characteristics, such as rank and years of service; and dates of service, including separation date. These records were also linked by scrambled Social Security numbers, allowing us to match the identifiers in the Defense Health Agency data.

Drawing on these sources, we identified all active-component service members who had at least one health care encounter for an mTBI diagnosis in calendar year To do this, we first needed to select a case definition for mTBI. We conducted a search of the peer-reviewed and gray literature to identify existing case definitions for mTBI; compared the various existing definitions according to comprehensiveness, agreement, and other factors; and, in consultation with an expert advisory group, selected a working definition for the project.

We also conducted analyses to determine the implications of selecting one definition over another.

We found that nondeployed active-duty service members diagnosed with a new mTBI in tended to be relatively young and lower-ranked. Specifically, half of these service members were junior enlisted personnel at the time of diagnosis. On average, those with a history of deployment had been deployed for 16 cumulative months prior to their mTBI diagnosis. These numbers varied by service, however, with Army personnel considerably more likely to have been deployed 79 percent , and for seven to nine months longer, than personnel from other service branches.

We also wanted to determine whether those service members with a new mTBI diagnosis in had previously received treatment for a TBI. We used two methods to identify relevant co-occurring diagnoses in our study population. First, we reviewed the mTBI literature to develop a list of symptoms and conditions that occasionally or commonly occur as sequelae to mTBI see, e.

Second, we examined the frequency of all ICD-9 codes associated with health care encounters in the six months following the first diagnosis visit for mTBI in our study population. Since service members may suffer other injuries as a consequence of the event that caused the mTBI, some of the symptoms and conditions we observed in the data may have been related to those injuries.

Clinical research suggests that symptoms for most individuals with mTBI resolve within one month of the injury Lundin et al. The symptoms and care of a small but not insignificant number of patients may persist to three months, and the symptoms of an even smaller group may persist for six months or longer. To ensure that we examined all potentially relevant care for every potential individual in our analysis, we selected an observation period of six months, though not all care observed during this time period was necessarily associated with the mTBI.

We examined the clinical setting in which service members in the mTBI cohort received their mTBI diagnosis, the setting in which they had their next health care encounter, their patterns of health care use, and the types of assessments and treatments they received in the six months after the mTBI diagnosis. We characterized the treatment settings where service members in the mTBI cohort received care. We distinguished between direct care , which is care received at military treatment facilities MTFs , and purchased care , which is care received in the community and paid for by TRICARE. We also identified whether the setting was a primary care clinic, emergency department, behavioral health specialty clinic, neurology clinic, inpatient facility, or other location.

We found that 60 percent of the mTBI cohort was diagnosed in the direct care system; of these service members, 40 percent were diagnosed at a primary care clinic, and 35 percent received their diagnosis in an emergency department.

On average, service members in the mTBI cohort had their next health care encounter 17 days after the mTBI diagnosis, and these visits took place in the direct care system for 87 percent of the cohort. Nearly half of those visits took place in a primary care setting. Service members with a history of TBI or deployment were more likely to have their next health care encounter at a behavioral health clinic, compared with those without histories of deployment or TBI, who were more likely to be seen at a primary care clinic.

To identify patterns of care over the six-month time frame, we defined several time segments of treatment following the mTBI diagnosis, including treatment received within the first 24 hours and every week thereafter. We examined whether service members received any care for any diagnosis or procedure , care potentially related to the mTBI based on diagnosis codes for personal history of TBI , care for symptoms related to mTBI, and care for behavioral health diagnoses.

Our findings agreed with the clinical research: The majority of service members in our cohort 80—90 percent received care for three months or less following their initial mTBI diagnosis, with most 75—80 percent receiving care for four weeks or less. However, a subset 10—20 percent appeared to have persistent care needs—that is, they received ongoing mTBI-related care for longer than three months after the mTBI diagnosis.

We identified diagnostic assessments, therapies, and medications potentially relevant to the treatment of common or occasional symptoms and conditions that can co-occur with mTBI using an approach similar to that described for comorbid diagnoses. We then developed a list of relevant assessments, therapies, and medications. We also reviewed the literature on the treatment of mTBI and consulted with an expert advisory group to identify additional relevant treatment. Finally, we examined the frequency of procedure codes Current Procedural Terminology codes associated with health care visits in the six months following the mTBI diagnostic visit, selecting those that were commonly received by the mTBI cohort.

While we were not able to determine whether these were related to the mTBI or for another reason, the most common diagnostic assessments performed on nondeployed active-duty service members with a new mTBI were CT scans 33 percent , psychiatric diagnostic evaluations For almost every assessment or evaluation, service members with a history of TBI any level of severity were more likely than those without a history of TBI to receive these and other assessments and evaluations in the six months following their mTBI diagnosis. The most frequently recommended initial treatment for mTBI is rest and patient education, activities that were not observable in our health care utilization data.

However, many patients with mTBI receive care beyond the initial visit; as such, we report treatments received by the mTBI cohort in the six months following the mTBI diagnosis. We were not able to determine whether the care received was for the mTBI or for another condition, as current TBI coding guidance recommends that health care visits after the initial visit include symptom diagnostic codes rather than a TBI-related diagnostic code.

As such, it is not possible to determine from these data whether physical therapy, for example, is related to the mTBI or a different condition. 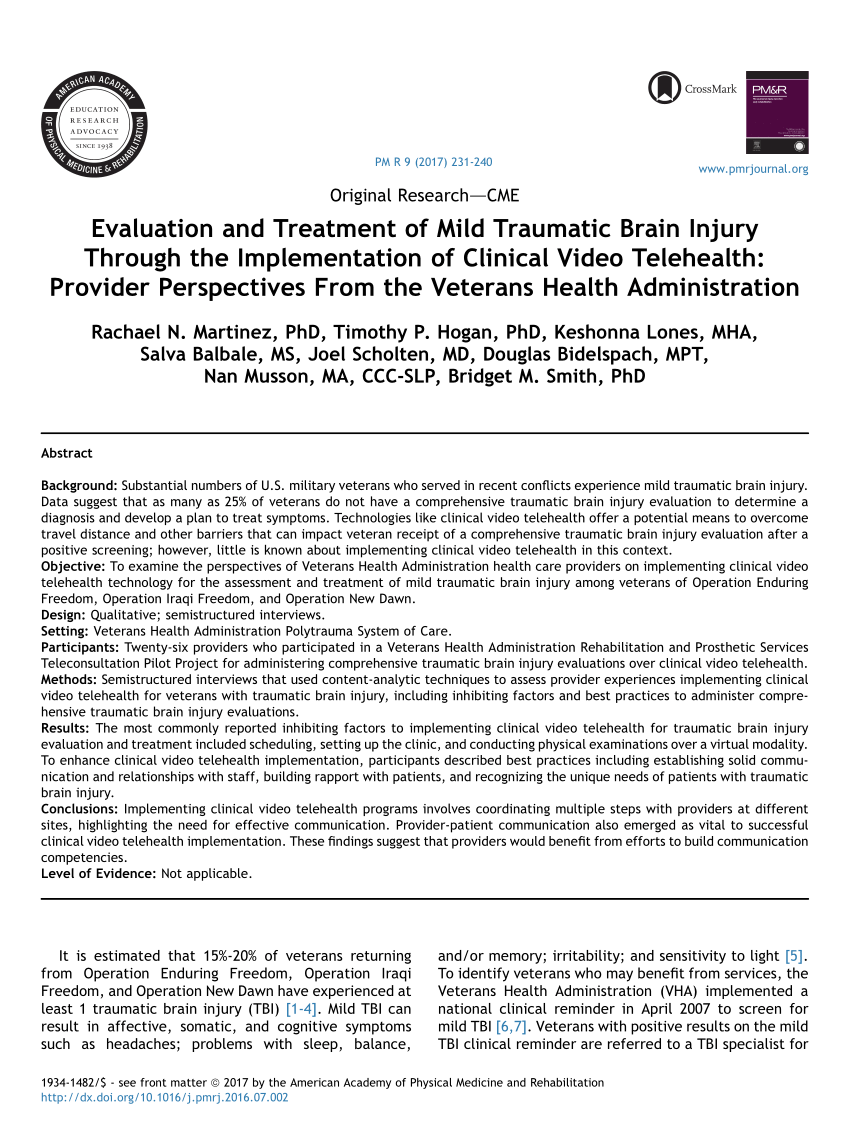 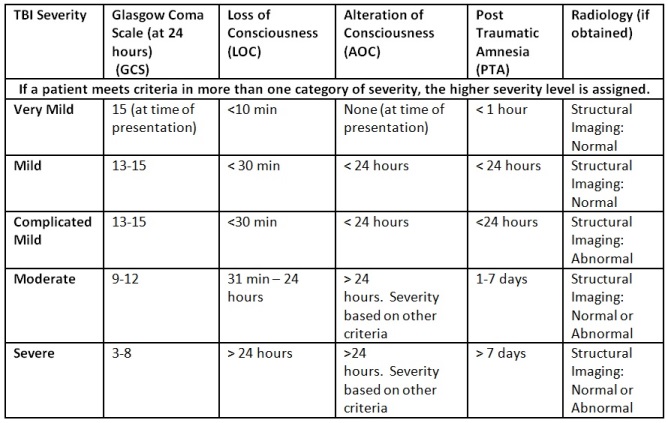 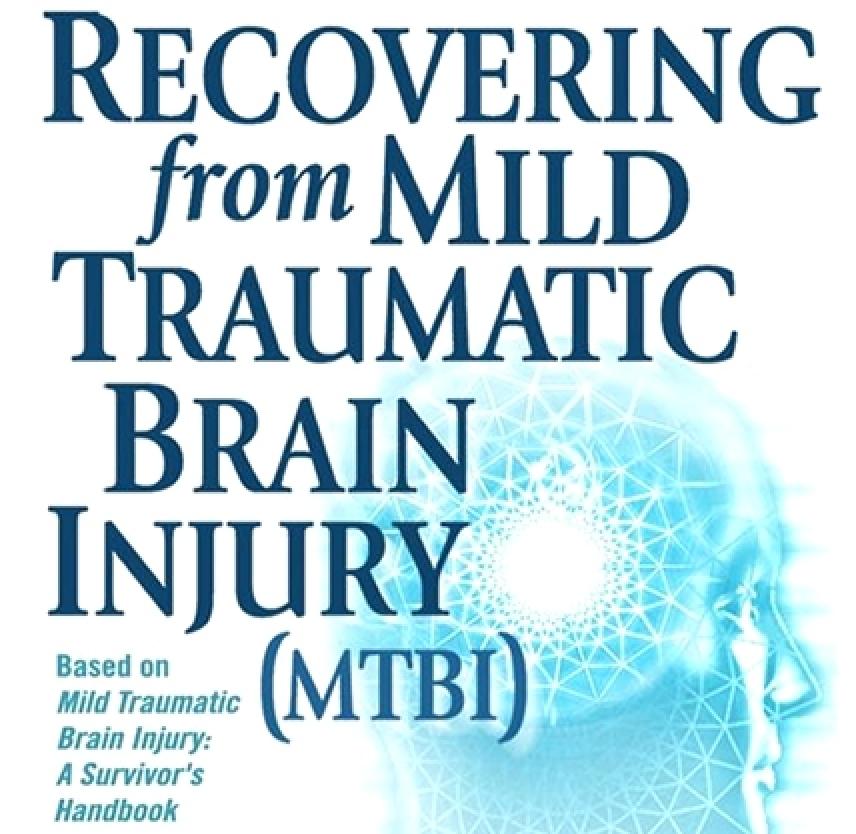 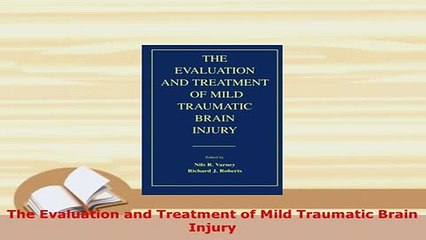 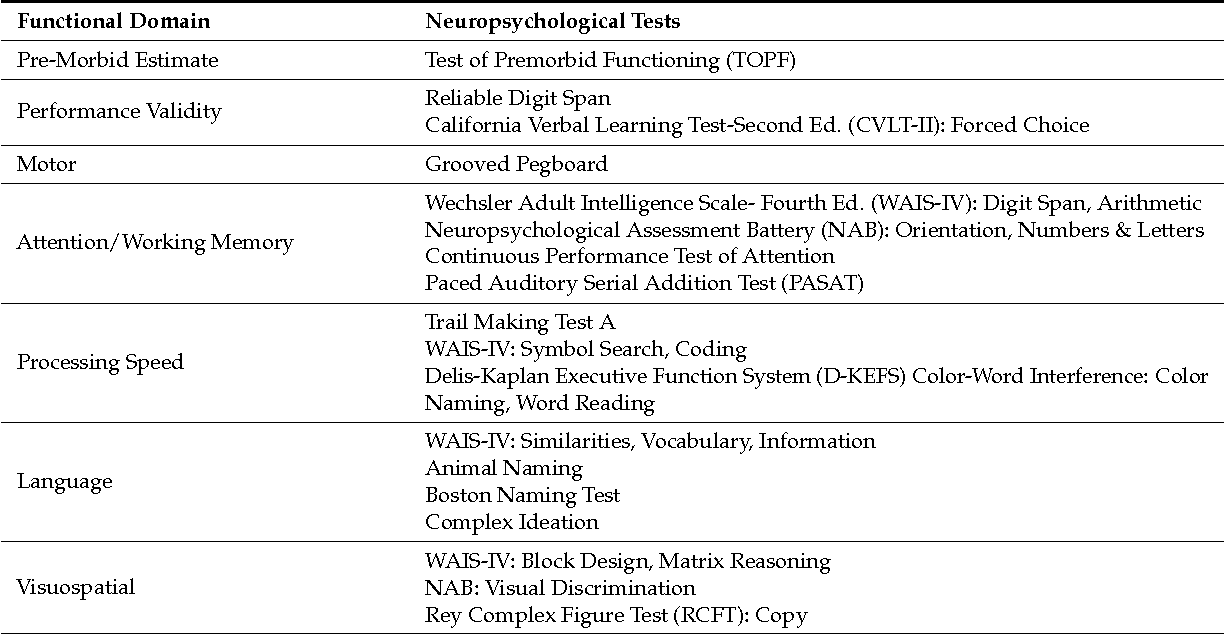 Related The Evaluation and Treatment of Mild Traumatic Brain Injury